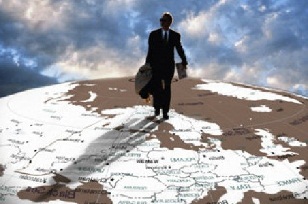 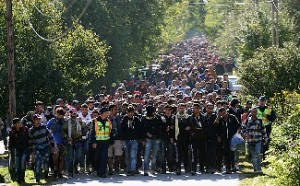 This article by Bryan Caplan is four years old, but I bring it up today because it’s the only serious attempt I’ve ever seen by an open borders libertarian to seriously consider the issue of HBD.  Although he seems to misdefine “eugenics,” Caplan shows that higher IQ individuals do better with low IQ immigration if everything else stays the same.  While the example he uses is a population that is exclusively brilliant deciding to let in a population that’s completely stupid, the argument works even if you acknowledge variation within a nation.

We can see this clearly if we use a thought experiment that mirrors what’s happening in America.  Let’s say you have a nation of 100 people with an average IQ of 100.  Because of the bell curve distribution of talents, your population looks like this:

Assume that 50 people from a group with an average IQ of 90 settle in your country.

Now let’s say you’re an airline pilot with an IQ of 115 in the original population and that there’s a minimum IQ of 110 for your job.  Before the population transfer, only 20% of people were capable of being trained as a pilot.  You probably get paid well for your rare skill.  But after immigration only 16.7% of your countrymen are smart enough to potentially do what you do.  Because the country has more people there’s more of a demand for flying but fewer people relative to the general population smart enough to take up the profession.  Your skill is more valuable and your salary goes up.  Also, when you hire a nanny, go out to eat or get someone to wash your car you benefit from the lower costs for the services of babysitters, cooks and gas station attendants.

On the other hand, if your only options in life are becoming a grocery store clerk, bricklayer or baby sitter, your wages drop and there’s no compensating advantage of being a part of a proportionally smaller in demand elite.

But at least our airline pilot friend unquestionably benefits, right?  Actually, there are other things we have to consider. Unfortunately, the low IQ masses vote.  They demand free health care, welfare and schools for their children.  Since the less intelligent commit a disproportionate amount of crime your tax dollars go to more jails and police (not to mention the better odds of getting robbed, raped or killed).  If the migrants are from a visibly different ethny they may demand the creation or expansion of affirmative action programs.  Our pilot may lose his job to an immigrant with an IQ of 105, who proceeds to crash a plane with some more high IQ people in it.

In the long run, multiracial societies with vast life disparities between different groups aren’t known for their high levels of social peace.

One of Caplan’s readers was nice enough to explain this to him in a different post.

The problem is that people with low IQs tend to produce negative externalities. They’re more likely to vote for bad policies, they commit more crime, they’re more likely to become public beneficiaries, and they’re less likely to contribute enough in taxes to pay the marginal costs they impose on other government programs.

If we lived in an ideal world with an ironclad guarantee of a minimalist government, I would agree with you. But as it is, it’s not at all clear to me that the net marginal benefit of more low-IQ people is positive.

“Negative externalities” is a very good way to put it.  Caplan’s analysis is good as far as economic truth goes but ignores all social and political realities.

The Negative Externalities of Immigration
+1 (800) 560-1768 -
Asylum Hotline
Our multi-lingual Immigration experts are waiting for your call to start your Asylum application. Or, visit your local site:

I want asylum In USA!